Discussion on anything to do with Melbourne Storm - games, players, rumours - anything!
Post Reply
51 posts

Vete has had a shoulder operation
Top

Faaaaaaaark. Any idea what for or how long he is looking at?
Top

Faaaaaaaark. Any idea what for or how long he is looking at?

He hopes to be back for round two.
Top

Tino injured his ankle today and is set to miss 4 to 6 weeks.
Top

Stimson apparently struggling with a back issue too.
Top

We are stuffed with all of these injuries
Top

Can't remember how he did in the trials but Eisenhuth could get a gig since we're short on backrowers.
Top

Seems to be him or Pat Kaufusi
Top

Not great unfortunately. But the club has high regard for him after his efforts last year and in the pre-season.

Just based on the squad named for round 1, I reckon Kenny will start on the left edge and we’ll carry Brandon Smith and three props on the bench. If an edge backrower goes down, we won’t have much coverage though.

Not sure Pat Kaufusi has spent much time on an edge either.
Top

He was 2nd rower of the year in Q cup so going to say he's spent a bit of time there if that helps.
Top

Another year, another pretty high player turnover rate. What are your predictions for Round 1?
Top

Of most intrigue heading into the 2020 season, is what our centre pairing will look like. Chambers and Scott moving on has opened the door for others to get a shot and cement their spot in first grade. Possible centre candidates are;

When Marion Seve made his NRL debut last year, the moment meant more to him than the culmination of years of hard work on the field.

The milestone was an opportunity for the 24-year-old - and his family in the stands - to celebrate his resilience in the face of incredible adversity away from the game.

He played six minutes off the interchange bench in a 22-10 win over the Raiders at GIO Stadium and soaked up every second - grateful to be playing elite rugby league and equally grateful for his health.

"He's had to go through tough times as a young man, at a stage when a lot of guys look to establish themselves as first-graders," captain Cameron Smith said after the game.

"His mum and brother were here for the game tonight and they looked like the happiest people on Earth and we're extremely happy for them and proud of the work he's put in.


Cameron Smith wrote:His story is inspiring. To fight back and get his first-grade debut shows outstanding resilience. 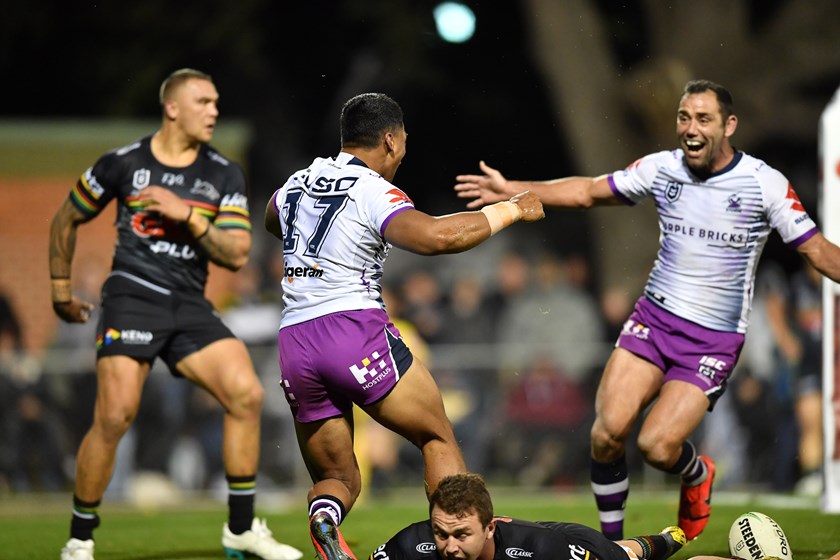 The stage three cancer had also spread to his liver.

"I was shocked but I knew I was going to beat it - I stayed positive," Seve said.

"I had to go through four rounds of chemotherapy and an operation.

"That went on for around six months or so and during that time I had to sit and watch my friends play footy."

While the intense course of chemotherapy weakened his body, his time on the sidelines only strengthened his resolve to chase his childhood dream and play at the highest level.

"Growing up in Ipswich, rugby league was a popular sport and everyone I knew watched it," he said.

"I played league as much as I could as a kid. It's always been a dream of mine to play professional footy."

"I didn't really have a favourite NRL club but growing up I enjoyed watching Origin and I was a huge Maroons supporter," he said.

As far as setbacks go, stage three cancer is likely on the podium.

While four bouts of chemotherapy took a toll on his body and mind, Seve said the support of his family and particularly his older brother Ben helped him stay positive.

"My brother Ben is my biggest inspiration," he said.

"He's been a mentor for me and a big influence in my life."

Seve returned to the footy field as soon as he was given the all clear, playing for his school side and gaining selection in the Australian Schoolboys team.

He won the Peter Stirling Medal in 2013, recognised as the most outstanding player in the GIO Schoolboy Cup.

His talent caught the eye of Wests Tigers selectors and he was offered a two-year contract.

Unfortunately, cancer wouldn't be the only obstacle he would be forced to overcome before realising his NRL dream.

The next arrived during his first season with the Tigers.


Marion Seve wrote:I lost my father to cancer two years after my own cancer. That period of my life was definitely the toughest.

His father Vaili was only in his 60s.

Seve and his manager negotiated a release from the Tigers, allowing him to sign with the Broncos and move closer to home to be with his family.

While he loved spending more time with his three nephews and three nieces, when Melbourne Storm came knocking he knew the move would allow him to focus on his football.

"Moving to Melbourne made me a little nervous - I knew I would need to work hard and take my game to the next level - but looking back at it now it's been a blessing," he said.

"Ever since moving here I've learnt and achieved far more than I ever did anywhere else.

"The weather here can be ordinary but you get used to it and the coffees here are much better. I really enjoy the lifestyle. "Everyone at the club is close, but (I'm closest with) my old housemate Tino (Fa'Asuamaleaui) and Kelma (Tuilagi) because he's always shouting me coffees for crossbar challenges."

The short glimpse of his hard running in his NRL debut the following year earned him 14 minutes of game time in round three, before he went on to start in 10 games during the home and away season.

In his breakout year he was selected to represent Samoa in tests against PNG and Fiji and again played for the international side in the 2019 World Cup 9s in October.

Melbourne's NRL side boasted depth in the centres last year with Seve, Justin Olam, Curtis Scott and Will Chambers all vying for selection.

Given the departure of Scott and Chambers, Seve is hoping to cement his place in the starting line-up this season.

"I just have my foot in the door so my mindset is to keep training hard and impress the coaches," he said.

"I want to play more first-grade games and bring my best for the team."


Marion Seve wrote:The more you put into this club, the more you get out of it - that for me is something I keep in mind.